USING CDSMP TO BUILD A SYSTEM OF COMMUNITY–CLINICAL LINKAGES

The Wellness Coalition began utilizing the Chronic Disease Self-Management Program (CDSMP) as an evidence-based intervention in 2008. A dependable and effective franchise of chronic disease self-management education, CDSMP has proven effective at helping people take control of their health in many settings and among different racial and ethnic minority groups. CDSMP co-leaders, called Lay Leaders, facilitate small group learning through scripted lessons and guided interaction. At least one of the two required Lay Leaders acts as group peer, not a health professional. In 2010 TWC sought Master Trainer status for three of its staff members and obtained a licensed capacity to certify CDSMP Lay Leaders. The Wellness Coalition (TWC) offers CDSMP for free.

HOW THE CDSMP NETWORK CAME TO BE

In addition to offering CDSMP as a service of TWC, the idea of a network of classes embedded within the community became TWC’s vision after a 2012 community survey.  Through an instrument designed by the CDC called the Community Health Assessment and Group Evaluation (CHANGE) Tool, residents expressed a need for chronic disease self-management education. In response TWC explored partnerships with African American churches in the River Region. Then, TWC and community stakeholders crafted an action plan to specifically target communities disproportionately affected by chronic conditions and lacking access to healthcare and healthy foods.

THE PROCESS OF TRAINING LAY LEADERS IN CHURCHES 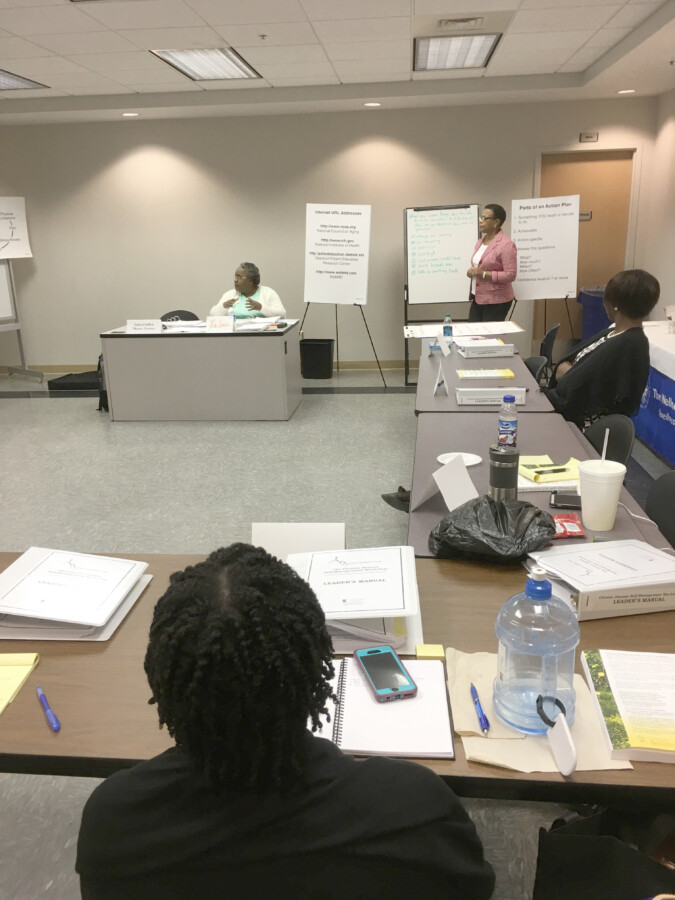 TWC forms partnerships with predominantly African American churches in order to train Lay Leaders and create a sustainable system of chronic disease self-management. We work with church partners to solve problems related to barriers to participation such as meals, transportation, and childcare. The Lay Leaders from partner churches are trained by TWC over the course of four full days. Group facilitation skills are practiced to ensure program quality and a sensitivity regarding potential participants.

Certified Lay Leaders from TWC accompany recently trained church Lay Leaders during the first CDSMP class offered at each church. Once two Lay Leaders from each church experience teaching a full cycle of lessons, they are considered certified and ready to provide coaching to a third Lay Leader on their team. TWC repeats this training pattern annually, coinciding with the recruitment of three new churches.

Chronic diseases occurring with the most frequency among all participants:

Among these frequency measurements, documented in Table A, the greatest concentration ranged from 1-3 chronic diseases, wherein about two-thirds of all participants were classified. Participants under 30 reported fewer chronic diseases than those who were older (Table B). 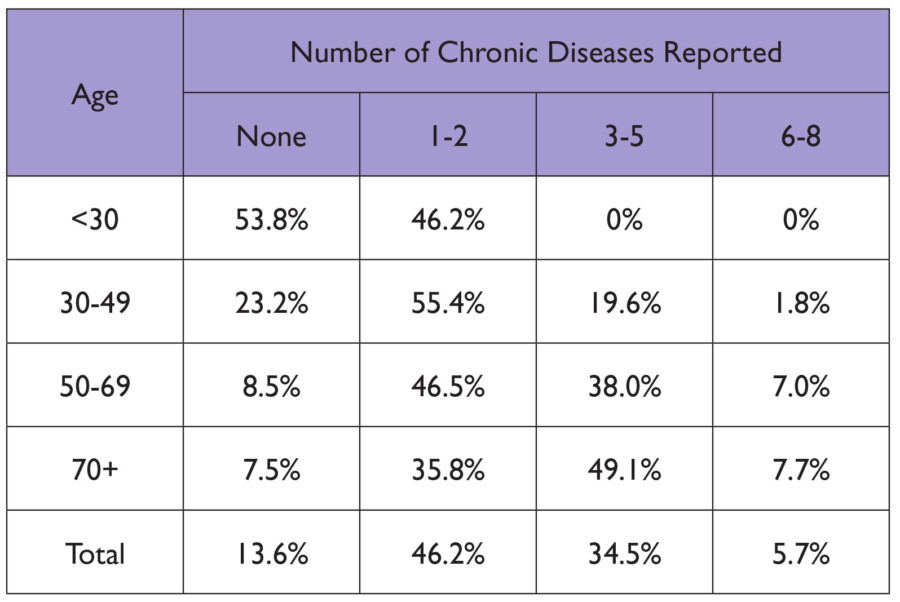 Table B: Percent CDSMP Clients Reporting Presence of Chronic Diseases at Baseline, by Number of Diseases Reported and Age

By the end of each course, most participants reported less limited activity because of mental, physical, and emotional issues, more attention to salt intake, and an increase in physical activity. They exercised more days per week at exit than at baseline, with the mean number of days increasing from 2.6 to 3.3 over that period. The percentage of people who reported no days per week of physical activity dropped from 24% at baseline to just 5% at exit.

Support networks formed at the majority of churches in the CDSMP network. Accountability partner groups and walking groups continued to meet weekly in order to cement behavior changes. These networks provided the ongoing support needed to sustain lifestyle changes for improved health outcomes. Church leaders and CDSMP participants continue to attest to the value of the program.

The majority of CDSMP participants lived in communities marked by health disparities and were themselves burdened with multiple chronic conditions. The health ministries of African American churches located within communities that are socioeconomically stressed and essentially racially segregated provide an effective public health partner in the work of confronting racial health disparities.

TWC would like to see more doctors recommending the program to their patients, especially to patients with multiple chronic conditions who have a harder time being physically active and following nutrition guidelines. As TWC moves into an expansion of this network over the next few years, we will find ways to create referral systems for the CDSMP network from clinical partners. Such a connection of community-supported programs and clinical sectors is referred to as a community-clinical linkage, or an intentional referral of patients to services or other resources that improve the management of chronic conditions.