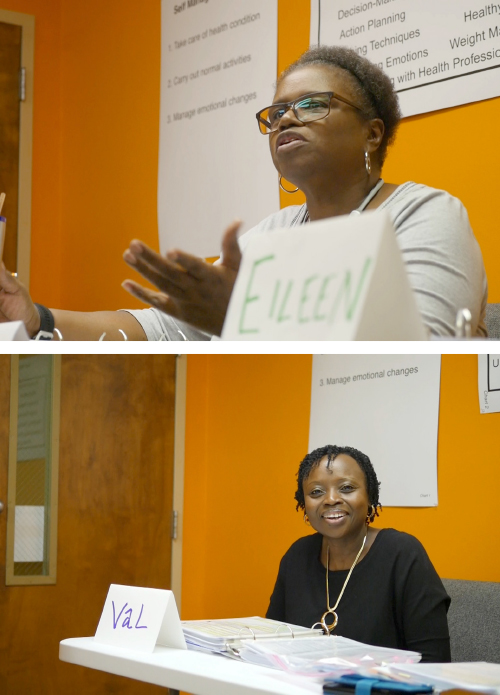 Living Well Alabama (LWA) is a chronic disease self-management program that involves a small group of participants interactively learning ways to manage chronic health conditions over the course of six weeks. LWA is designed to be co-led by people who have chronic conditions or who have loved ones affected by chronic conditions. These leaders are trained to facilitate learning with fidelity to the original design of the program developed and proven to be effective by Stanford University.

Staff at The Wellness Coalition (TWC) became Master Trainers for LWA in 2009 in order to train as many people as possible to lead the program in different locations throughout the River Region. Key partners in the effort to expand the reach of LWA have been churches. Those trained to teach LWA classes are called “Lay Leaders.” As of this publication, Lay Leaders at seven churches in the River Region have maintained their certification to offer the program, and three of these churches are currently offering LWA classes.

Better Covenant Ministries: Leaders With a Love of Learning

One of the churches currently offering LWA classes is Better Covenant Ministries (BCM), located at 4050 Fairground Road in north Montgomery. This non-denominational church, led by Pastor Andre Prude, agreed to teach three rounds of LWA classes in 2018. They completed their first round of classes with 14 participants on February 21. A second round is being taught from March 21 through April 25, and a third round will be taught from May 23 to June 27.

First Lady of BCM, Valerie Prude, and Elder of the church, Karen Hawkins, became trained to teach LWA in October of 2017. When asked how the program fits into the educational efforts of BCM, Elder Hawkins said, “We believe that God desires for us to live well in every area of our lives which means that it is necessary to learn how to take care of our bodies, emotions, finances, homes, and soul.”

She continued, “In the church sometimes we concentrate so heavily on the spiritual side of life we often neglect other areas. The Living Well curriculum allows us to bring light to the things we go through on a day-to-day basis and, even though our family and friends may not be experiencing the same issues, what we feel and how we deal with life issues are not uncommon.”

As she went through her training last October, Elder Hawkins wasn’t sure if people in her church would take the opportunity to work hard on the issues that can complicate chronic conditions in their lives.

“I wondered how well this class would go over and if people would be interested and/or participate,” said Elder Hawkins. “Now that we have gone through the first round I have been amazed at how well received it has been and how open the people were to dig in, learn, and apply the principles that were taught during the class. In some ways, it almost feels as if the class went by too quickly.”

When asked what it meant to her personally to become trained to teach the LWA program, First Lady Prude said, “In essence, I view it as assisting people in investing in a vision to become healthier and make changes in lifestyles to optimize health. What a rewarding experience! I love it!”

When asked the same question, Elder Hawkins expressed her love of teaching and her appreciation for all that the curriculum had taught her.

“The three areas that have meant the most have been action planning, problem-solving and brainstorming, because they show you how to break things that seem to be large or insurmountable down into smaller more manageable parts,” said Elder Hawkins.

A Dynamic Classroom of Differences and Commonalities

The differences among the participants in BCM’s first round of classes for 2018 contributed to the success of the LWA learning experience. The group of 14 people represented a spectrum of age groups:

Yet another relational difference of this first group was that three of the participants were not members of the church congregation while the others knew each other through church activities.

These varied backgrounds and connections added to the weekly conversations between participants, but they also allowed all involved to see that, even with the many differences between them, there were many shared experiences and behaviors in the group. As a result, each participant demonstrated a great capacity for empathy and for bonding in support of the others.

Top: Patricia and Abel share a glance at the end of a Living Well class at BCM; middle: Sheena shows off a healthy snack; bottom: Annie contributes to the conversation. Photos courtesy of Christian Hardy, BCM Media.

Patricia and Abel are leaders in the church who took part in the class. They are married with a young child still at home. They both expressed their satisfaction with the level of relationship and trust-building that went on in the LWA classes. They appreciated the accountability that they felt to the group and how it made them more accountable to themselves. Abel felt privileged to know what others were going through so that he could lend support through prayer or kindness.

Patricia said, “Accountability is about motivation; it’s about people backing you up and supporting you as you journey together.”

Patricia and Abel have been awed to see the results of mutual support realized by the small group learning experience of LWA.

When it came to specific lessons that were most meaningful to them, Patricia acknowledged the simple awareness that various tools of self-management can be used to break the complicated “Symptom Cycle” that can keep us subservient to chronic conditions. The biggest learning moment for her was about serving sizes because it has become custom to have large portions on our plates.

“We can have healthy plates, when we have measured portions,” said Patricia.

For Abel, the biggest learning moment was about the power of his mind to calm his physical symptoms of stress. He had never done a meditative body scan before and he now utilizes this tool regularly in order to relax and to distract himself from chronic pain.

Sheena is also a leader in the church and a young adult. She admitted that she was reluctant to sign up for the six week course and that, prior to the start date, she wasn’t excited about it at all. She changed her mind, however, and began calling LWA “life-changing.”

Sheena was at first hesitant to share openly with the others, but she found the group dynamic “naturally supportive and encouraging” and the class environment to be “open and fun.” She loved celebrating each person’s accomplishments and sharing accomplishments of her own.

The learning Sheena appreciated most was action planning: the effort of making a weekly plan for a certain task that one wants to do with specific time and date parameters. Sheena has always been action-oriented because there is a lot that she needs to do, but action planning has allowed her to be more intentional about what she wants to accomplish.

A testimonial for the role of the support of others in our lives came from Annie who is a neighbor and not a member of the church. Annie received discouraging news about her health three weeks into the LWA classes. This news knocked her off course and kept her from completing her action plan that week. Before receiving this news, Annie had given her phone number to Aquila, another LWA participant and a church member. Aquila called Annie at a pivotal time, allowing her to fully grasp the peace and perspective that Annie needed to put the setback behind her.

As a result, Annie gave a victorious report to the class the following week as she provided feedback that, rather than fail in her action plan, she had received a valuable boost from a friend and fellow traveler. Aquila later spoke of the mutual benefit of sharing one’s needs openly with a trusted friend, saying, “When people open up, it helps me understand what I am going through.”

Bringing the Elements of Learning Together Through Living Well

At the end of the first round of classes, Aquila summed up the essence of LWA by saying, “If you’re not planning, you’re planning to fail.” Putting the tools of self-management to work in the company of a small group of supportive peers adds motivating fuel to the process of sustaining an active role in the management of one’s health.  Combine those elements with group leaders who love to teach and learn themselves, and you have an effective, potentially life-changing program.

The Wellness Coalition thanks Better Covenant Ministries for expanding the number of opportunities available in the River Region to experience the benefits of Living Well Alabama!